The mitral valve has two simple jobs: to open and to close.  Failure to close properly can result in the blood going backward which can lead to symptoms and damage the heart.   Alternatively, the mitral valve can become narrowed (mitral valve stenosis) which can cause blood to back up in the system.   While the mitral valve can be replaced, we don’t have good replacement options.  A mechanical valve can be used with the intent of avoiding further surgery but requires a blood thinner called warfarin (Coumadin) and can lead to stroke or bleeding (about 1% chance of each per year).  For this and many other reasons, mitral valve repair is preferred. Many studies have shown improved survival with repair over a replacement for prolapsed valves.  There are many causes of mitral valve disease, including mitral valve prolapse, rheumatic disease, coronary artery disease, infection (endocarditis), and others.  At high volume centers, repair is likely in the vast majority of cases.  Replacement is limited to those patients with severely damaged mitral valves for which repair is unlikely to be successful either in the short-term or long-term.

With endoscopic robotic mitral valve repair, we make five small incisions in the right armpit area: four that are 8mm (slightly larger diameter than a pencil) and one that is 12mm in size (size of an average pinkie finger).  The real advantage of this over traditional sternotomy (breastplate division) or non-robotic or robotic “port access” approaches (5-10 cm”mini” right thoracotomy) is that incisions are very small and rib spreading is not needed.  Rib spreading causes pain.  The incisions are so small that no portion of the operation can be done by the surgeon looking directly through the ports.  This is how I define “totally endoscopic” robotic mitral valve surgery.  The truth is that many hospitals claim to have robotic mitral valve programs but very few are able to perform these procedures through tiny ports only and in high volumes.  The reason for this is that developing this level of expertise for both the surgeon and the team requires a high level of commitment and teamwork that many institutions struggle to obtain.

The other advantage to approaching the valve robotically from the right chest is that the valve and the heart are in their “natural positions” (as opposed to sternotomy where the heart has to be aggressively retracted to expose the valve which I believe makes it easier to repair the valve.  Mitral valve surgeons disagree on many things, but one thing they all agree with is that you have to see the valve well to repair it and I think after you see the videos of the procedures you will agree there is no better exposure of the valve than with the robotic camera and dynamic robotic retractor.  The bottom line is that if a surgeon can see the valve well they can usually repair the valve.  The robotic view of the valve is superb in the vast majority of cases.

For mitral valve regurgitation (leaky mitral valve), repair is likely in centers that perform a high volume of mitral valve surgery.  In the case of mitral valve prolapse, the chance of repair in such centers is 95-100%.  The robotic technique has been shown in retrospective studies to have a higher repair rate. If a replacement is required, a 30-35 mm incision (with a 35mm port) is often necessary to allow us to get the new valve into the chest but there is no rib spreading.  Patients with prior surgery via a sternotomy (breastplate division) can be ideal candidates as the technique avoids most or all of the scar tissue created by the previous operation.  There are only a handful of programs in the U.S. that perform the endoscopic robotic mitral repair in “redo” patients with prior heart surgery and we are one of them. 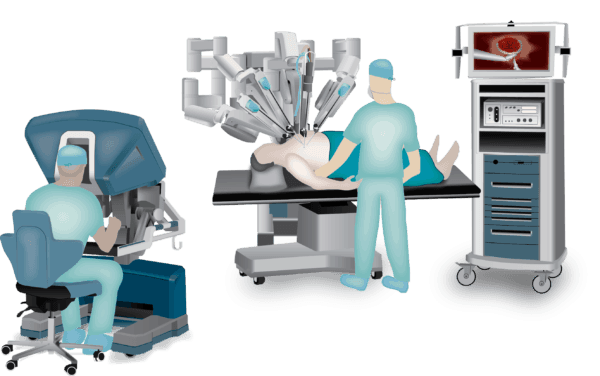 The surgeon sits at the console next to the patient and operates the robotic system.

The surgeon can see the valve very well as can all team members participating in the surgery (by looking at TV screens in the OR).  In standard surgery, usually, only the surgeon can get a reasonable view.  I think it is easier to expose the valve and see all of it than with traditional approaches. Performing totally endoscopic mitral valve surgery with the robot requires the use of advanced catheter-based techniques for heart-lung bypass and stopping the heart as illustrated here.  The terms Heartport, Thruport, or Port Access have all been used to refer to this technology which is very powerful when combined with robotic technology.  Basically, robotics is the next major development in minimally invasive heart surgery that allows the size of the incisions to be incredibly small. 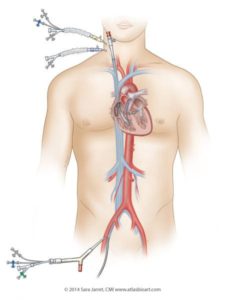 A catheter system provides heart-lung bypass and keeps the heart protected during the procedure.

In traditional surgery, the heart is bypassed and stopped during surgery using tubes (cannulae) placed directly in the heart. With our endoscopic robotic approach, this is usually done through blood vessels to the leg (femoral artery and vein) using catheter-based approaches.  In most patients, we can place these catheters (also called cannulas) into the blood vessels “percutaneously” without any open surgical incisions.

One additional difference between totally endoscopic robotic mitral valve surgery and other techniques is that it requires much more teamwork in the operating room than most programs can muster.  The era of the “superstar” surgeon is over and the era of the “superstar” surgical team has arrived!  With robotic mitral valve repair in New York, you will benefit from such an approach. The robot can also be used to replace the mitral valve.  Other procedures can be done at the same time including tumor removal, closure of the atrial appendage, MAZE procedure for atrial fibrillation, tricuspid valve repair or replacement, and others.  Patients with HOCM (Hypertrophic Obstructive Cardiomyopathy) can also undergo resection of the abnormal muscle blocking flow and repair of the mitral valve with the endoscopic robotic technique.

Below is a video of a robotic totally endoscopic mitral valve repair performed by Dr. Guy

Request an appointment online to discuss robotic heart surgery. If no appointments are available quickly enough for your needs, please contact my office at 215-955-6996

Dr. Guy earned his MD and completed surgery residency and cardiothoracic surgery fellowship at the University of Pennsylvania. He has extensive training and experience in robotic cardiac surgery. He is a former Lieutenant Colonel in U.S. Army who served 3 tours as a combat surgeon in Iraq and Afghanistan. He is Professor of Surgery and Director of Robotic & Minimally Invasive Cardiac Surgery at Sidney Kimmel Medical College at Thomas Jefferson University Hospital in Philadelphia.

Based on the 2017 AHA/ACC Focused Update Incorporated Into the 2014 AHA/ACC Guideline for the Management of Patients With Valvular Heart Disease, 2014.
This tool is not designed to and does not provide specific medical advice, professional diagnosis, opinion, treatment or services to you or to any other individual.

Or use the form below!